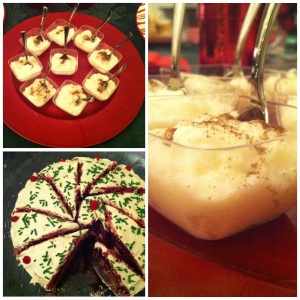 It’s that time of year when my clothes starts to feel extra snug, my but goes from phat to just fat and I secretly wish I was diabetic so I can justify my refusal of the onslaught of sugary sweet morsels that must have been crafted by the devil cause their so ridiculously tempting. (I may have said too much) In honor of my love for the sweets, I recently hosted a small dessert/cocktail party to kick-off the holiday’s and served my favorite sweet temptations of the season: *recipes below

rice pudding: because it reminds me of my childhood, I love the texture, it’s not overly sweet and the cinnamon says christmas to me. 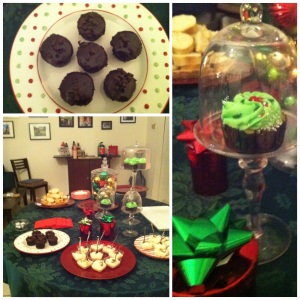 red velvet cake: It’s red and delicious! I’m definitely more of a red & green christmas-er. I don’t mind gold but I just can’t do silver. I had a plastic white christmas tree growing up that I hated. My mother considered herself very fashion forward and decorated it with silver and blue balls. It might have been an 80’s thing but I love the more traditional feel of red, green & gold decorations. Red Velvet cake feels very festive to me.

cupcakes: my anytime favorite, cupcakes do not require a reason, season or cause. Their great any day or anyway. If I’m eating a cupcake that in itself is a celebration. My little sweet cakes came from a local cake shop, I ordered Chocolate Ganache and christmas themed Vanilla cupcakes from Misha’s Cupcakes.

I hope you too are indulging this holiday season! In January, I promise I’ll post a series of low-fat & low-carb recipes to make us all feel better =)

First, heat the rice, water, salt, and cinnamon sticks for 15 minutes over medium (to high) heat. You want it to boil but not scorch. Next, add the milk and sugar and let boil for a bit. You want to see the rice grains split open then bring the heat to low and let it cook. Once it gets creamy remove the pudding from the heat. Remove the cinnamon sticks and mix in raisins, vanilla or any add-ons you desire. My mother sometimes added shredded coconut.

First you’ll need to preheat your oven to 350 degrees F. In the bowl of a mixer, cream together the shortening, eggs and sugar. In a separate small bowl, mix together the cocoa and food coloring. Add the paste to the shortening mixture. Sift the flour and salt together over parchment. Add to the batter alternately with the buttermilk in 3 additions. Add the vanilla extract. Fold in the baking soda and vinegar. Pour the batter into 2 greased 9-inch cake pans. Bake for 30 minutes or until an inserted cake tester comes out clean. Let cool on a cooling rack. Invert the cakes from the pans.

Over medium heat, cook the flour and milk until thickened. Let cool. In the bowl of an electric mixer, cream together the butter, sugar and vanilla until light and fluffy. Beat in the flour mixture.

Frosting your cake:
Frost the top of the first layer with frosting and set the second layer on top. Frost the entire cake with remaining frosting.